Got a dream?   Well let's make it happpen!   Any island you can dream of, wherever your spirit leads you; we are trained & ready after more than three decades of leading adventures in 30+ tropical countries -- to help you turn those dreams into rockin' reality.   Before such a major decision, we appreciate that you'll need to know a lot more about your destination, your options -- & your travel planners.   Info -- that's the ticket -- straight up with no hot air.

Information is power, pure and simple.   And we do believe the power belongs to you, the dive vacation guest.   What's more, you have a right to know as much as possible about the people who will help you plan this trip -- by refining + defining your vision into a safe and affordable reality.   Therefore, to better make our company -- U.S. DIVE TRAVEL / Live-Aboards.com -- an open book for your thoughtful review, this professional adventure dossier was prepped to help our guests answer all these key questions:

Whether you book a "do-it-yourself" trip, one of our guided dive-yacht vacations with Live-Aboards.com, a customized exploratory tour with Wild Island Expeditions, or a regular week's dive trip at a fun resort, this information will help you make your decision in an expertly-prepared & stress-free manner.

Following is the adventure travel profile of the man who carries the prime responsibility for overseeing your customer service, your satisfaction & your personal security overseas -- John Hessburg -- founder of U.S. DIVE TRAVEL & Live-Aboards.com.. This detailed r�sum� covers many highlights -- but not all -- of John's wilderness adventures in the mountains, on & under the ocean, in trackless deserts & deep jungles in far-flung regions around the world since 1970. Several of the most remote explorations have been kept off this list -- a matter of ethical choice -- to protect sensitive wilderness sectors that are vulnerable to tourism impact. But many of the most memorable adventures still made the list.

Bottom Line: at USDT the buck stops here. So we invite you take a few minutes, & meet the guy who signs the contracts & musters the team around here. John is so hyper-focused on planning details + safety for our clients that (when he's out of the room) we like to call him (yes he's a full-tilt Type-A) -- "Mr. Relaxo." 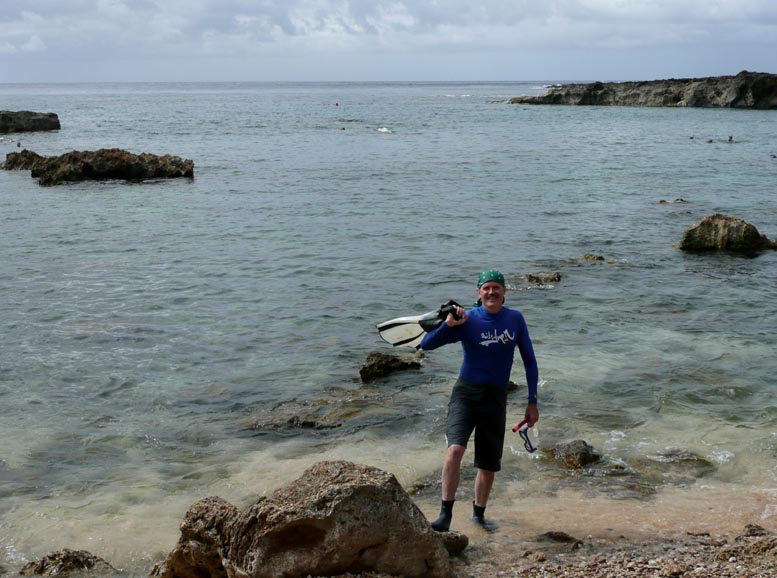 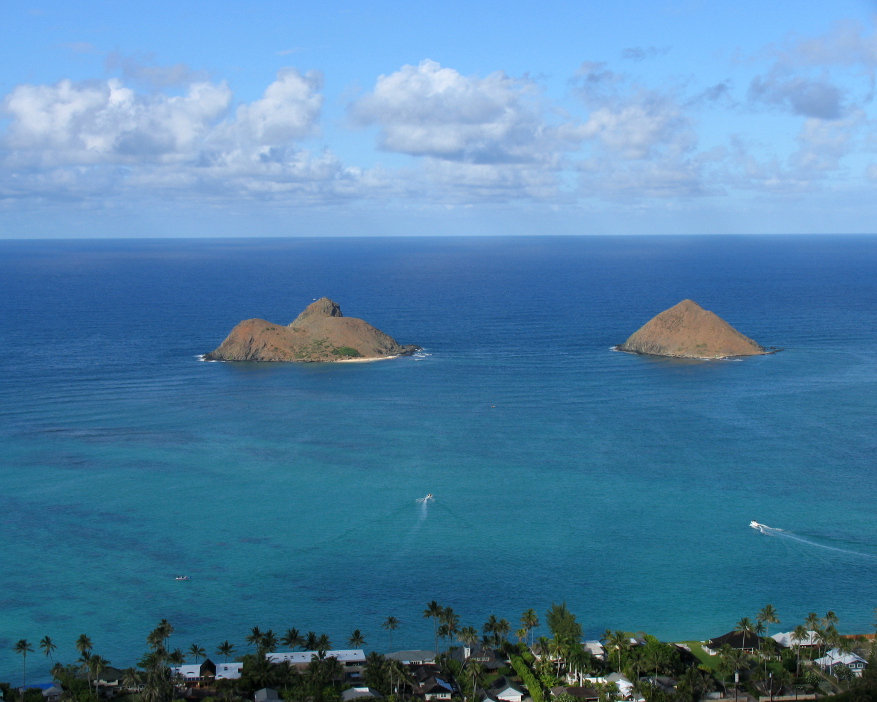 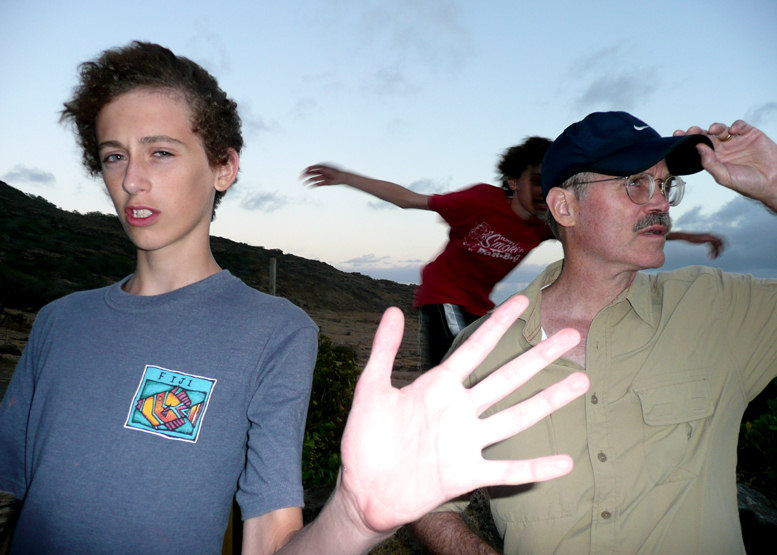 AITUTAKI ATOLL, COOK ISLANDS, South Pacific:
Free dives at coral heads near lagoon's rim, in stiff surge, searching for giant moray eels. Helped native crew capture one 100-pound specimen, after a 3-hour battle to extricate it from its crevice in a coralhead. Found many giant Tridacna clams. Scared up a school of 7-foot manta rays who swam in "aerial formation" overhead, blocking the sunlight for a crystal moment. The deep, almost hypnotically rich turquoise-aqua blue of Aitutaki Lagoon ranks this atoll easily among the most beautiful in the South Pacific, travel writers agree. This place will mesmerize you. It's why Susan & John Hessburg quit their corporate jobs & founded U.S. Dive Travel. March 1990. 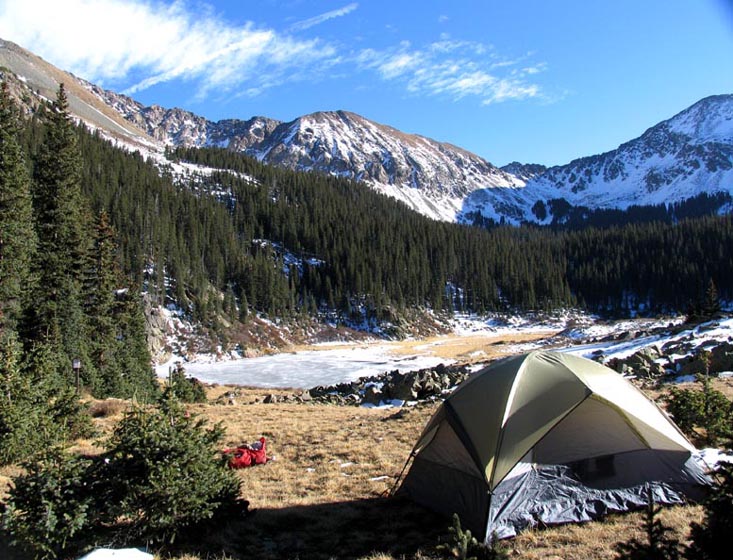 The ANDES of BOLIVIA

Led eight-man U.S. expedition -- right-hand men were Seattle's Pete Delmessier & Eddie Boulton -- to uncharted sector on eastern flanks of Cordillera Real (Royal Range). Three-day approach trek, herding 49 llamas with 2,200 lbs. of food & gear over three 15,000' passes. Explored two virgin high valleys of Chearoco-Chachacomani massif, a key geologic thrust of the Central Andes. We were the first non-indigenous people to explore these magnificent valleys, as pristine as they were millennia ago. Base camp was set at 14,100'. Three high camps: two at 16,400', one at 15,300'. Strict environmental protection enforced at all camps. Team hauled out every scrap of refuse that was not burned. In the 6 weeks we camped & climbed above 14,000 feet, we left virtually zero discernible evidence of any human visitation. In periodic contacts with Aymara Indian villages miles down the valley, we established friendly trading partners, & bartered for mutton, raw quinoa grain & sacks of Andean potatoes, our favorite staples.

The ANDES of ARGENTINA 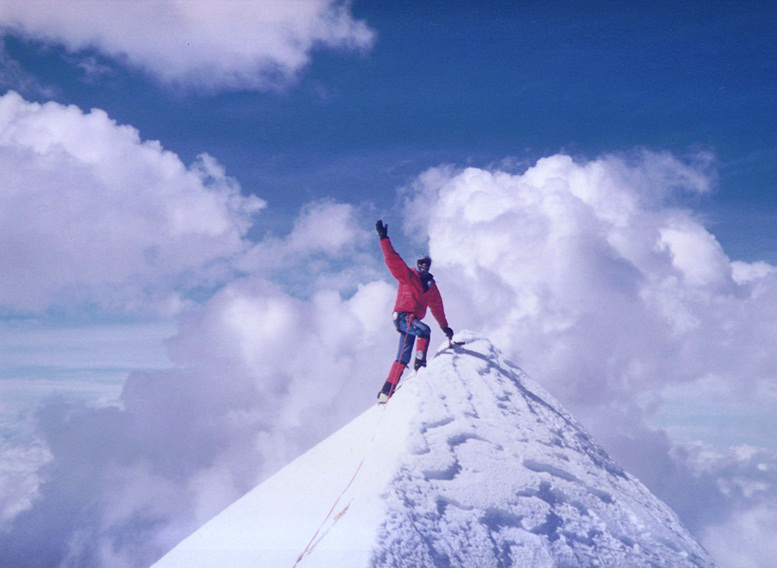 (Unless noted, all peaks in the Cascade Range, Washington state. A score of strong veteran alpine buddies over the years. Climbs since 1983. ) 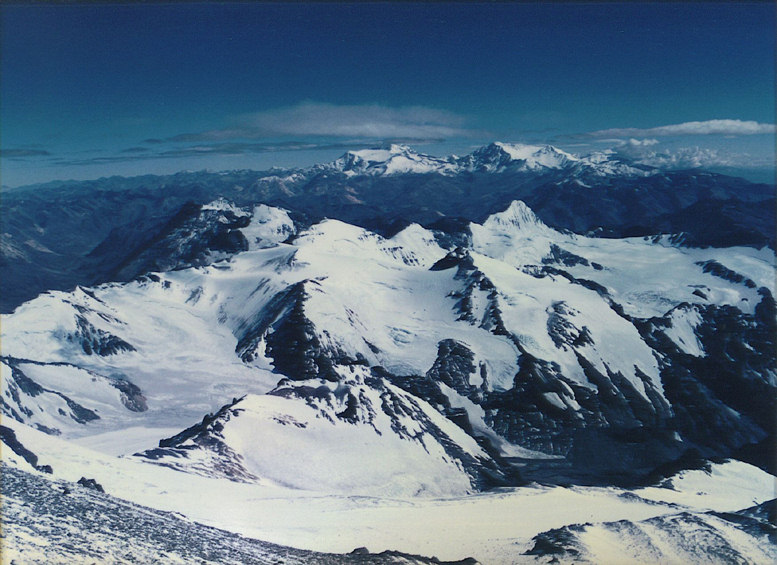 © Copyright 1986-2014 / John Hessburg, U.S. Dive Travel Network. All Rights Reserved.
View from high camp at 20,300 feet on the North Face of Aconcagua, Argentina, during a 1986 U.S. expedition.
At the horizon line, more than 85 miles to the NW, looms Mt. Tupungato in Chile, while Pacific clouds scoot by
in a dark line just beneath the white layer. The Pacific Ocean is more than 120 miles west of Aconcagua's peak. 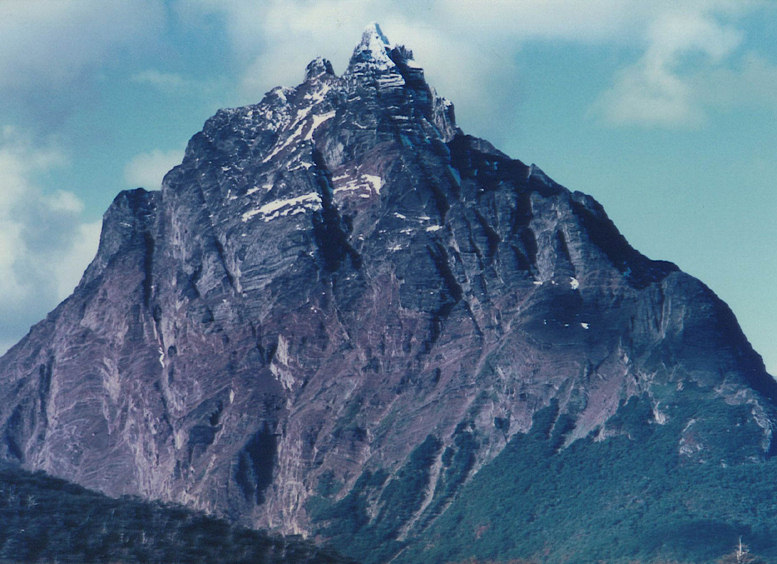 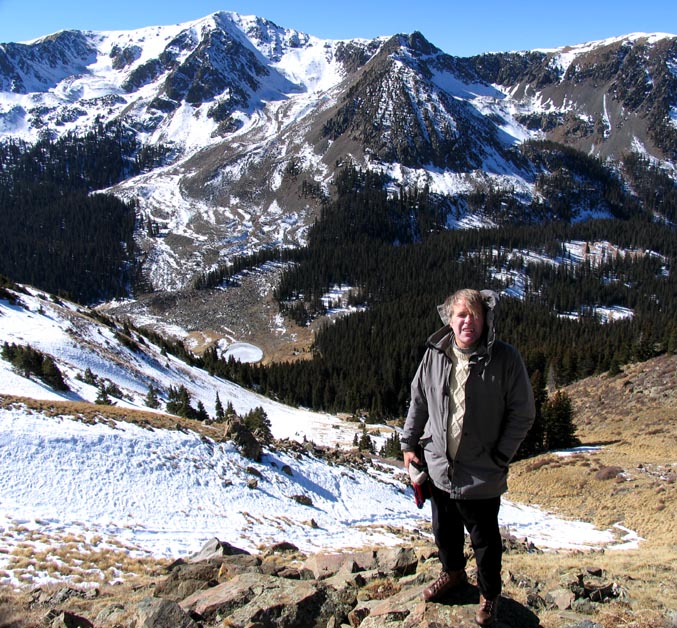 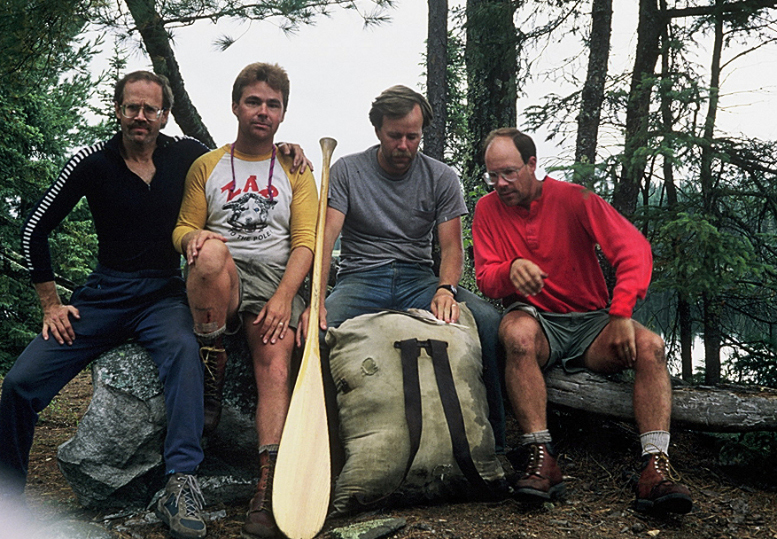 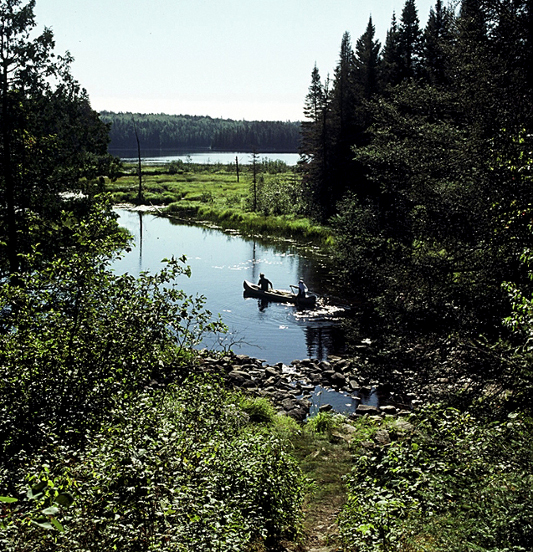 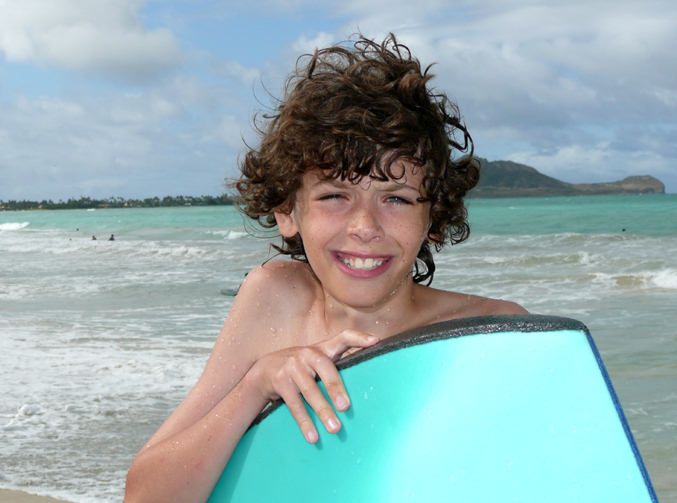 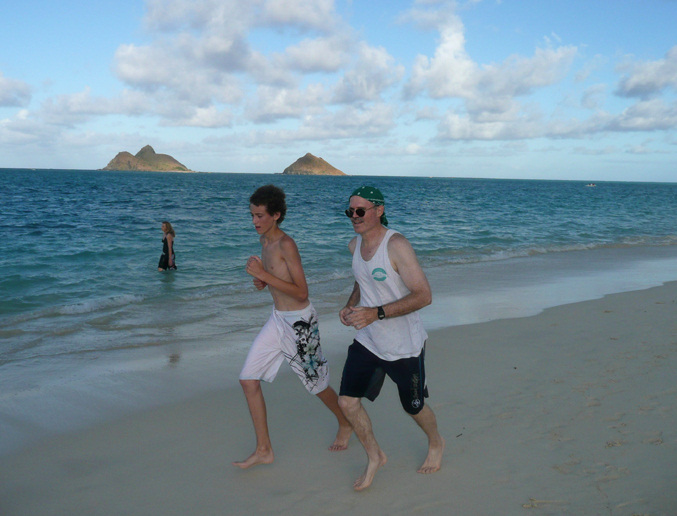 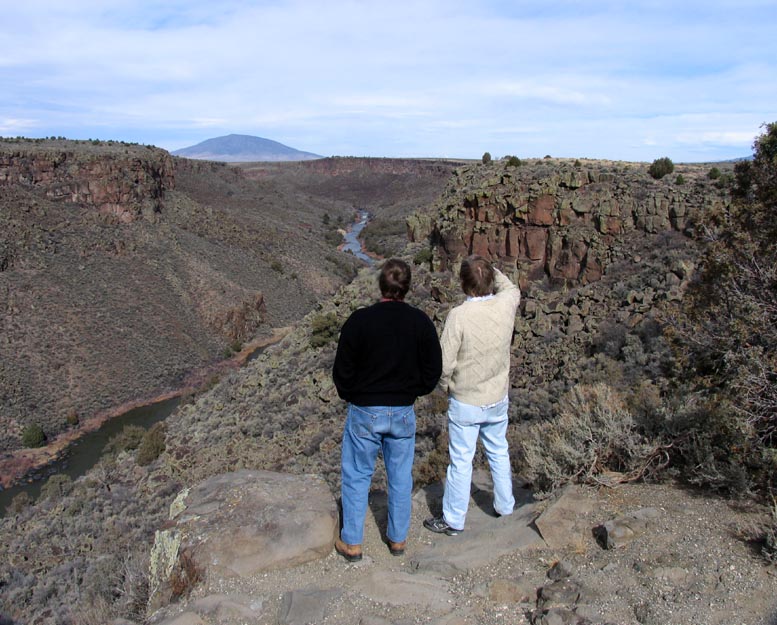